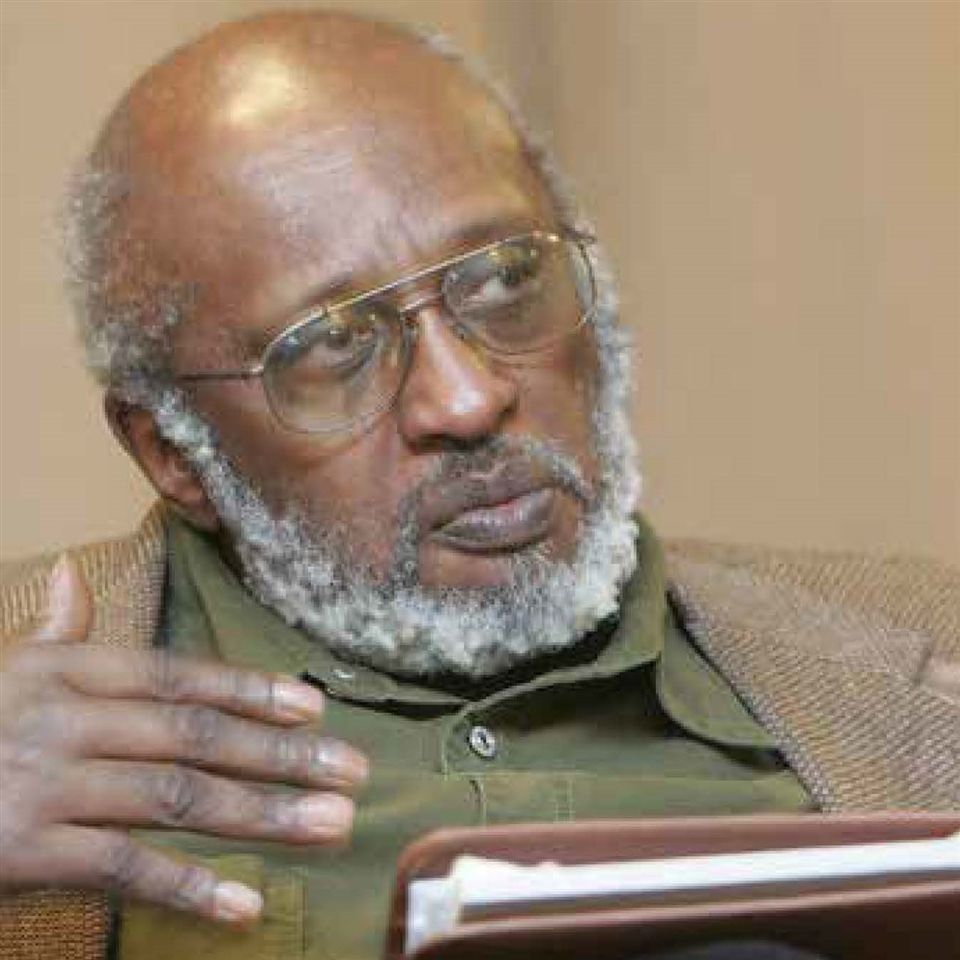 Prexy Nesbitt has spent more than five decades as an educator, activist and speaker on Africa, foreign policy and racism. He has made more than 100 trips to Africa, including trips taken in secret to apartheid-torn South Africa. His career has also included extensive consulting and training on class, race, multiculturalism and diversity. An experienced teacher and lecturer at both the high school and university levels, he has also worked as a social worker, union organizer, special assistant to the late Mayor Harold Washington and senior program officer with the MacArthur Foundation in Chicago.

A product of the University College of Dar Es Salaam and Antioch College, he was active in the U.S., Canada and Europe in the struggle to end apartheid and worked to end colonialism in Angola, Mozambique, Zimbabwe (former Rhodesia) and Namibia (former Southwest Africa). From 1979 to 1983, he worked worldwide as the program director of the World Council of Churches Program to Combat Racism based in Geneva, Switzerland. In the late ’80s, he served as senior consultant to the Mozambique government, organizing in North America to prevent the apartheid-backed rebel movement, RENAMO, from gaining official support from the Reagan administration and its allies.

Today, he travels the U.S. speaking on social justice issues relating to race, multiculturalism and diversity; community and labor organizing; and militarism and war, especially in relation to Africa. He continues to teach African history courses at Columbia College Chicago and leads educational and cultural tours of Southern Africa, Latin America and Chicago’s South and West Sides. He founded and leads Making the Road (MTR), an educational project that aims to make in-person links across national, ethnic and racial borders and generations to foster progressive analysis and activism on different axes of racial, social, cultural and economic justice.

Social justice, education and activism have been the focus of your life and work. How did your family start you on this path?
My family started me on social justice issues when I was in elementary school. Also the church I belonged to, the Warren Avenue Congregational Church, was very active on social justice issues. Both my mother and father were teachers and had come from families who were very active politically. My father, along with his brother, my Uncle George, for instance, organized the redcap workers union at the Randolph Street Trailways bus station in the late 1930s. My mother, a former Parker board member, was the director of the Maxwell Street YWCA and organized the first group of children from Lawndale to join the Chicago Children’s Choir. Both were examples of living lives in which one “gave back,” as they often stated it.

How did you come to work with Dr. Martin Luther King? What was the nature of your relationship with him?
The Warren Avenue Church invited Dr. King and his organization, the Southern Christian Leadership Conference (SCLC), to make its home base there. I was returning from Tanzania at the time, and my mother suggested that I volunteer with Dr. King and the SCLC. Dr. King was interested in me because he wanted to take his nonviolent movement to Rhodesia (later called Zimbabwe), so we were on a first-name basis. He had at least two meetings with me to talk about Africa. Working with Dr. King was a great learning experience.

What brought you to Tanzania? How did this impact your life upon returning?
I went to the University of Dar es Salaam in Tanzania after I was rejected from joining the University College of Rhodesia. I did this through my year abroad while I was at Antioch College. The students I met there had a great impact on me, especially the students who were refugees from South Africa, Namibia and Mozambique. These classmates had nothing. Many of them had walked north out of South Africa and Namibia with only a shopping bag’s worth of extra clothing while I had arrived in Dar Es Salaam with two footlockers of clothing and books. They taught me to live with very little and to appreciate what I had.

Tell us about your teaching career.
Since 1970, I have taught largely African-American, African and social change-related subjects. I have taught at Columbia College Chicago, Illinois Institute of Technology, Saint Xavier College, Mundelein College and Kalamazoo College, as well as at Parker and St. Mary’s High School. The most rewarding aspect of teaching has been running into students who remember me, and remember my classes, and felt that they gained something truly beneficial to them.

What was it like to work for Mayor Harold Washington?
Working for Harold Washington was one of the great experiences of my life. I served with the special unit that answered only to Mayor Washington and his chief assistant. We were sent all over the city, addressing all kinds of problems. I have had the good fortune to work with some extraordinary leaders like Harold, Nelson Mandela, Dr. King and Samora Machel, the first president of Mozambique, which was a great opportunity for me to learn about leadership. Harold, for instance, was a very principled man. He wasn’t one to work in the old Chicago “Machine” style of buying voters from church ministers by giving them jobs. He told me it was my task to liaise with the ministers who supported him by getting them lists of job openings and showing them how to apply for jobs, not just doling them out like cookies or candy.

You’ve consulted for and worked with leaders of foreign countries and governments. What has been most satisfying about that work?
I got to work with Nelson Mandela only in his later years, sporadically, but I was very close to his widow, Graça Machel, from Mozambique. I also was a guest in their house on various occasions and brought visitors to their home to meet them. The greatest joy I have had, from the work I’ve done in foreign countries, is getting to know people who are open to learning about people all over the world. People worldwide say to me, “Why are you going back to the United States? You’re really one of us!”

Why did you found Making the Road? What is its function and purpose?
Making the Road was founded to enable people, especially young people, to have the joy and learning opportunity that travel, and getting outside of the United States, provides. Each MTR Travel Seminar, focused on a specific transnational issue area, highlights the history of social justice movements and the challenges of today’s struggles in the countries visited as well as in the United States and globally.

How did your time as a student at Parker influence and impact the direction your life has taken?
When I was a Parker student, I was exposed to an absolutely impressive faculty, led by people like Sarah Greenebaum, Jack Ellison and Barney Negronida, as well as Toni Marshall, Ellen Holingsworth, Pat David, Chauncey Griffith and Bill Lowry.

What are some of your favorite Parker memories?
One of my favorite memories as a Parker student was the 8th grade senior picnic, and I, an 8th grader, was fortunate to be invited by the late and famous Karen “Cookie” Kupcinet, a senior, to be her date. Another great memory has to do with Miss Marshall’s 7th grade speech class. In 1977 or ’78, I was giving a divestment (anti-apartheid) speech at Stanford University, and when I entered the auditorium, who should greet me but Miss Marshall! I announced to the overflow audience of students that my 7th grade teacher was there, and they all rose and gave her a standing ovation! It was so wonderful of them to do that and made the rest of my speech very easy that day.

As an administrator it was a great joy to work with the faculty and staff. I was very honored Principal Don Monroe invited me to serve as the dean of students and later as dean of diversity. One of multiple memorable situations in my work as Parker’s dean of students was when several parents enrolled an exchange student—a young man from war-torn Bosnia—in the Upper School. Limited in his language skills and not able to transcend being an “outsider,” he didn’t mesh well with many Parker students. He therefore built a social life outside Parker with some youth from a neighboring high school. A young man from that school felt that our Bosnian student was infringing on his turf (mostly getting cozy with his girlfriend) and threatened to kill him. Because our student was accustomed to dealing with violent threats, he responded as he was conditioned to—he armed himself, including fortifying the home of the shocked friend at Parker whose home was where he was staying! When the whole sad saga threatened to intensify further, I and other administrators, working with Chicago law enforcement officials, arranged to fly our student back home to Bosnia.

I am still in touch with many Parker families whose students I worked with as the dean of students. Many are now adults and have their own families. These wonderful relationships have provided a certain constancy and continuity in my own life.

My other lasting memory is my closeness to various members of my class. We don’t meet much as a total class, but I have had the good fortune to travel the United States through my work and activities, so I’ve had the chance to encounter these old classmates of mine, and we are almost always able to revisit old memories and renew our closeness. This dynamic had a special magic and healing dimension when many of my classmates reached out to me on the occasion of my sister Roanne’s tragic death. In fact, I noticed during my student years and my sojourn as an administrator/teacher that one of the great strengths of the Parker community was its ability to come together and be a source of comfort and renewal when there was a crisis.