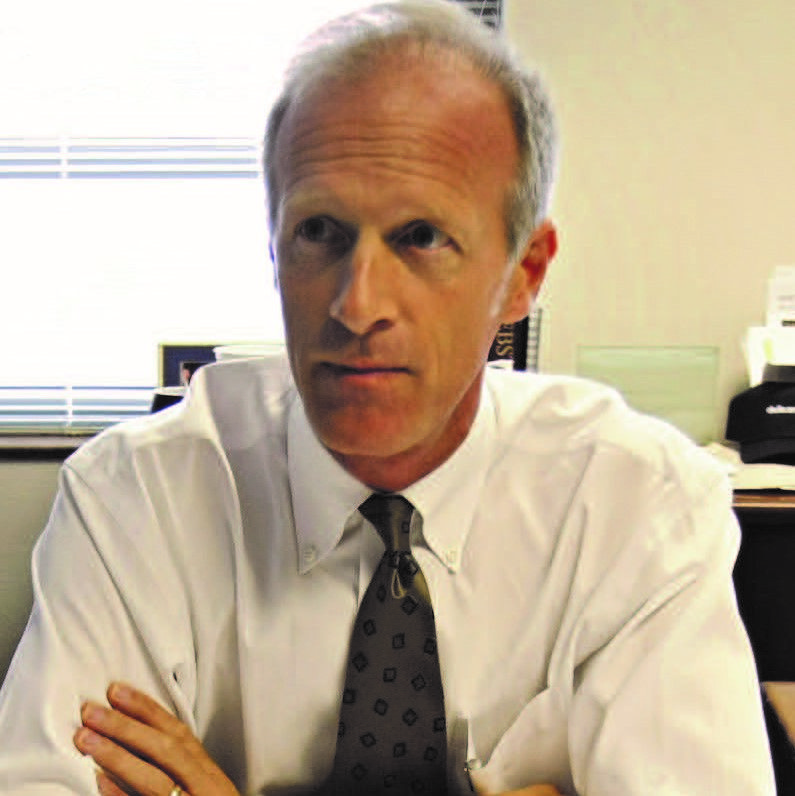 Anthony Moor is a director of product management at Yahoo in Sunnyvale, California, overseeing Yahoo Search on mobile and tablet devices. He previously was director of editorial operations and developed an experimental local news presence in hundreds of U.S. neighborhoods and cities. Prior to Yahoo, Moor was editor of several online newspapers around the country, including The Dallas Morning News. He jumped into interactive media while reporting for San Francisco’s KRON-TV during the dot-com boom. Moor holds a degree in astrophysics and American civilization from Williams College. His wife Karen is an events manager at a winery, and they have two daughters: Maggie, 18, a freshman at Yale, and Carolyn, 15, a freshman at Mountain View High School. They live in Silicon Valley. Anthony’s brothers live in Los Angeles: Carl ’79 is a judge and Peter ’82 is a shadow teacher.

What first interested you in journalism?
It probably was latent in my genes longer than I realized. My mom [Lynne, former member of Parker’s Board of Trustees] always wanted to be a journalist, but she believed that wasn’t possible when she was in college in the ’50s. I remember loving newspaper-type assignments throughout the years at Parker. I wrote articles for the Parker Weekly, including one in 1978 about the “computer revolution” in the science hall, describing student-programmed video games we’d created for the school’s early PCs.

At college, even before classes started, I discovered the college radio station. A student leader assigned me to report for a community affairs program. I loved visiting new people and places on campus and telling others about it. Although there was no academic track for budding journalists at Williams, I continued interviewing, digging up facts and crafting radio stories, communicating what I knew in an engaging way. I also studied theatre and developed planetarium shows. (Parker stage training stood me well on the presentation front.)

By the time I was a senior, TV news seemed the most logical way to tie together my diverse interests. I found a Williams alum who was in charge of ABC News bureaus in Asia and asked for a job. He sent me to Japan as a desk assistant, and I never looked back.

Any good stories to relate about your work in the early days?
A local TV reporter’s life is full of firsthand observation, from the sublime to the tragic. From Japan I played a small part in ABC’s and CNN’s coverage of the Soviet Union’s shoot-down of KAL Flight 007 and the assassination of Philippine exile Benigno Aquino. In San Francisco, I covered the ’89 quake from the collapsed Cypress Freeway. I’ve buttonholed presidents for comment, from Reagan to Gorbachev to Clinton; watched a volcano and solar eclipse up close; helped right community wrongs by exposing them to the light of day; walked death row; turned in murderers; and discovered dead bodies. I watched penitent pilgrims in New Mexico drag life-sized crosses for miles to an 18th century Adobe church, followed American Navy doctors in the Persian Gulf practicing mass casualty drills in preparation for an invasion of Kuwait, rafted wild rivers and accompanied snowshoe-clad scientists in the Sierra as they measured the snowpack in search of drought data.

How did you make the transition to online news reporting?
In the mid ’90s I started covering the Silicon Valley tech boom, including startups named PayPal, Palm, Netscape, Amazon and RealAudio, and saw friends jump to eBay, Quokka, CNET and Intel. I didn’t want to grow old as a local TV news reporter when it seemed a generational shift in how people consumed news was becoming a seismic event. A colleague at a financial news startup hired me for cash and equity, and even though the stock never amounted to much and the salary was a pay cut, it set me on the path to where I am today.

Tell us about your work with Yahoo. Where do you envision information sharing heading in the near and distant future?
I am in the third phase of a varied career: digital product development. I spent my first two years at Yahoo with product managers, engineers, designers and business development experts building and testing several consumer products for local news. I hired a team of local journalists in nine U.S. cities, and we acquired a startup that produced crowd-sourced news. Those efforts taught us a lot but didn’t pan out. I have continued building digital content experiences and recently took over mobile and tablet search. If you use Yahoo to search for something on your smartphone or iPad—that’s me.

Today, nearly all information about anything is available on demand. In the near term, information is going to become more personalized and even easier to access. If you follow news on the Yahoo homepage or use Mail, Search, Google Now or other services, you can see how we deliver news and information tailored to you just by knowing a bit about you and your preferences. The next step will be that you receive what you need to know without ever having to explicitly request it. This will be revolutionary. You will hand off the logistics of life to algorithmic intelligence so you can spend more time living it.

Longer term, information awareness will expand into the physical realm, as your home, possessions, consumables and biometric data become enmeshed in this smart grid. It can sound Orwellian, and we must be acutely aware of the dangers and proceed with caution. But this is the future, and there are as many benefits as risks. Technological development has always preceded our capacity to fully understand and adjust to its secondary effects, but the genius of humankind has been our ability to surmount obstacles and fulfill the promise of a better world for many in the end.

What are your thoughts on the impact of technology, media and design on education?
I think we are in an unusual time when students are becoming teachers for the rest of us. As cataclysmic changes in information technology disrupt how people learn about the world and share their understanding of it with others, it is students who are showing us how to apply it. While some look to CNBC or the Wall Street Journal to describe the ebb and flow of capital in business, Kickstarter is spotlighting a project today that could become tomorrow’s breakout product.

Ask yourself: How are Snapchat and Tinder changing the way young people relate to each other, and what are the implications? A teenager founded Snapchat [a photo messaging app], and a 20-something entrepreneur who was a startups veteran founded Tinder [a mobile matchmaking app]. One of Yahoo’s most successful mobile apps is “News Digest,” created by 17-year-old Nick d’Aloisio using technology he developed at 15. (Yahoo bought his company, Summly, and he came to work for us.) I met Nick as he was working on News Digest and have never been more impressed by a teenager’s creativity, leadership and understanding of users’ needs. I would work for him.

Students can take the ubiquity of real-time information and a vast archive of historical data and use new tools to make sense of it for themselves and others. They are not bound by tradition or practice and are creating new ways to reveal truth through media. They’re using new tools in revolutionary ways, literally: Twitter directed and captured the essence of Egypt’s revolution at a street-bystreet level. We are just beginning to understand the secondary effects of these tools on society. What do Uber and AirBnB tell us about how the next generation values progressivism and workers’ rights or the value of efficiency and the sharing economy vs. ownership and excess?

So our job as parents and teachers becomes not so much to teach them to use the tools; tools are changing too fast. It’s not to drill them in standard forms of academic discourse, although they need some baseline to begin. Instead, we should focus on inculcating the timeless principles of citizenship, ethics, morality, enlightened reasoning and discovery. We should reveal what those tenets have led the human mind to accomplish to date. And then we step aside, making the new information tools available to them so they can show us what they can discover and do for society, whether through prose or code or crowdsourced aggregation, multimedia, biofeedback or something else.

Were there individuals or activities at Parker that influenced your decisions after graduating?
Parker teachers and educational practices infuse every facet of my thinking. How could they not, since I grew up at the school? Parker helped me find a love of learning by encouraging me to discover what I wanted to know. Parker exposed me to the variety of life, from the biology of ponds in Lincoln Park and how computers process information to the best way to make a medieval princess’s royal carrying bed, which we built in 5th grade. It truly was what Colonel Parker’s colleague John Dewey said: “Learning by doing.”

What are some of your favorite Parker memories?
I wrote a paper comparing and contrasting medieval and Renaissance art in 4th or 5th grade. When I was a senior on the varsity baseball team, the sweetest game ever was beating a much-superior North Shore Country Day team 12-5 for our final outing of the season. I played a ragtime piano piece during the bar fight scene of our 8th grade play Westward Ho, thanks to Z [Pauline Zanetakos]. I learned the recorder thanks to Mr. Wolgamot and played in a double-consort for years with him, Mr. Mesple and schoolmates. I was Ali Hakim in Oklahoma!, thanks to Laura Warren. We went rock climbing and rappelling in Carbondale, Illinois. In 6th grade, Mr. Handschuh developed a unit in which we became “marooned” on an island and had to create our own society. Mrs. Kalin had us 4th graders build a hang glider and try it out at the Indiana Dunes. In Upper School, Doc Holland showed us what an expanding universe looked like. Mr. Markwell taught us what “historiography” meant by guiding us through a CSI-style investigation of the life of Richard III, and we read the Bible as history.

What do you enjoy doing when you are not working?
I’ve developed a number of excuses to be outside: hiking, skiing, roller-blading, outdoor volleyball (it was so much fun to be on the Marina Green on January Saturdays in San Francisco in my 30s, recalling how different that was from a Chicago January). I bicycle to work daily and think of Mr. Geer often, as a result.