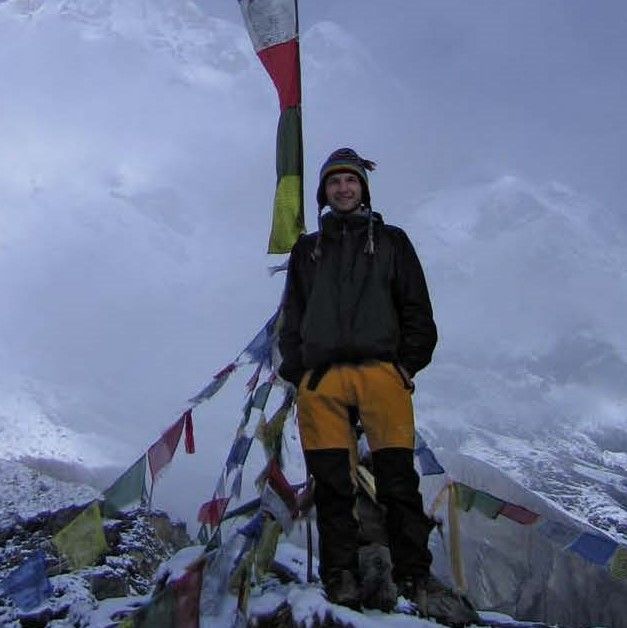 Kirill Kireyev was born in Minsk, Belarus (former USSR). When he was 12, his family moved to the United States, seeking better economic and educational opportunities while the Soviet Union was undergoing its collapse. They landed in Chicago, where Kireyev attended Lincoln Park High School for a year before transferring to Parker as a sophomore. He graduated from Cornell University magna cum laude with a B.S. in computer science. He worked with a number of software technology companies, ranging from ecommerce to architectural design to scientific computing. In the meantime, he became an avid traveller, spending time backpacking in Peru, the Middle East, Southeast Asia and Nepal (where he participated in volunteer development work with Engineers Without Borders). He then earned a joint Ph.D. in computer science and cognitive science at the University of Colorado in Boulder, where he developed an interest in artificial intelligence (AI) and its applications in building intelligent educational technologies. Shortly after graduate school, Kireyev developed instaGrok, an innovative educational search/discovery engine hundreds of thousands of teachers and students use. He is currently working on an AI-based intelligent reading tutor app to help low-literacy adults improve their reading abilities. He also advises a number of other technology startups. He lives in Berkeley, California with his wife, Lucy Flood.

What do you remember about life in Belarus? Were you aware of what was happening politically at your young age?
I remember life as relatively carefree in Belarus. We lived in a central part of Minsk, next to a river (Svislach) and a large park (Gorky Park). I was largely shielded from the political corruption and oppression that was (and still remains) quite prevalent there. Later I learned about the societal injustices and distortions, such as the caricatured negative way in which Byelarussian government/media portrayed the U.S. and the West and artificially propped up the patriotism among its citizens. I never met my grandfather on my mom’s side; he died while imprisoned by the Soviet regime before I was born, and little is known about the later years of his life.

What are some of your early impressions of Chicago?
Seeing the United States, particularly Chicago, was exhilarating in many ways: the tall skyscrapers, fast cars, picturesque Lake Michigan—even the giant supermarkets were something I had never seen before! I enjoyed biking along Lake Michigan, playing in parks and strolling along the busy streets of downtown and Lincoln Park. It was also intimidating jumping right into a new culture (or rather, a multitude of cultures). I had some prior knowledge of English, but not enough to feel comfortable in casual conversations. I remember struggling to understand others in conversation and often felt embarrassed by missing humor or cultural cues. Thankfully, this became easier after a few years.

How did you become interested in computer science and technology? How did that evolve into your specific interest in technology for education?
I’ve always had an interest in science. I remember reading astronomy books and science fiction as young as eight years old. I was chronically under-challenged in school, and teachers would often give me more advanced science books to keep me busy in class. When I was about 10, my school opened a computer lab (a rarity back in those days), which immediately fascinated me. While most kids went there to play video games, someone taught me how to program, and I was hooked. I delighted in being able to use logic to create something tangible that comes alive on screen. It was a number of years before I got a personal computer of my own; in the meantime, my parents bought me a programmable calculator (an incredibly clunky contraption by modern standards), which I spent a lot of time on. When I moved to the U.S., I had already spent thousands of hours programming and knew that’s what I wanted to continue studying.

When I went to get my Ph.D. a few years after college, I took an Intro to Cognitive Science class, which was an interdisciplinary subject touching on psychology, artificial intelligence (AI) and neuroscience. I immediately became captivated by understanding the human brain and learning and modeling/improving it with intelligent technology. Shortly thereafter I met Dr. Thomas Landauer, who has become my mentor and got me involved in doing a lot of fascinating R&D on learning technologies as part of my work for Pearson Education.

What is instaGrok?
Shortly after graduating, I started wondering about creating something new and innovative in the learning technology space. This gave birth to instaGrok (instagrok.com), a search/discovery engine to help students learn and foster their curiosity. The “grok” in instaGrok is a word that originated in the science fiction novel Stranger in a Strange Land, and it roughly means, “to understand something so deeply that it becomes an inseparable part of you.” When I look back, I realize that it was my own insatiable desire to learn independently and follow my curiosity—as well as my frustrations with being able to do so freely within the constraints of a traditional education system—that motivated me to create something that facilitates learning and discovery for others. Hundreds of thousands of teachers and students have used instaGrok, and I’ve received grants from the U.S. Department of Education and other education technology awards to support it.

What kind of work are you doing with artificial intelligence and literacy?
I recently cofounded a nonprofit start-up called TextGenome (textgenome. org), which is developing an AI-based reading/literacy platform. To explain it simply: it creates personalized reading recommendations, vocabulary practices and exercises to most optimally improve learners’ vocabulary (which has been the biggest single predictor of success in school and beyond). Our technology incorporates the latest in literacy-related academic research and innovative AI algorithms. I am also the founder of a project called Evolving Literacy (evolvingliteracy.com), which is developing a mobile app to help more than 35 million low-literacy adults in the U.S. improve their reading skills.

Were there activities or people at Parker that influenced the choices you’ve made since graduating?
Definitely. For example, my senior year I did an independent study in computer science under the guidance of mathematics teacher Peter Barrett. This experience helped me not only learn more about what I’m interested in, but develop the habit of taking learning into my own hands and defining my own learning goals and outcomes, as well as presenting my work to others. Parker’s student government helped me understand and appreciate collective discussions and decision-making. Last, because so many people at Parker are so unique and receive encouragement to cultivate their interests and gifts, I left empowered to carve my own path in life and contemplate my deeper purpose.

What are some of your favorite Parker memories?
I loved the mischief and humor that transpired for the Senior Prank day. Also, I loved participating in the school musicals, appreciating all the selfless hard work and preparation that goes into creating a beautiful production.

How do you enjoy spending time when you’re “off the screen”?
I try to be physically active—biking, rock climbing, yoga, skiing, hiking. I recently went on a week-long back-country rock-climbing trip in the Sierras. My wife and I met on a meditation retreat, and we have a daily meditation practice. We are also obsessed with studying different personal development and contemporary spirituality practices, which the Bay Area is an incredible hub for.

Anything else you’d like to share?
I am incredibly grateful to Parker for all the support and inspiration I experienced there, as well as life lessons and insights that continue to reveal themselves years later.